My story begins, as I said, with a mid life career change.

I became a farmer.

I did NOT see that coming.

To flash back a bit further – My husband grew up on a farm; but, in the late 1980s, no one was encouraging bright young people to stay on the farm.  That was the era of Willie Nelson singing for Farm Aid.  US farmers had been told by Earl Butz (Secretary of Agriculture in 1971- 76) to “Get big or get out!” and they did.  Often times taking on large amounts of debt to finance that growth.  In the 80s though, interest rates skyrocketed and commodity prices fell.  Leaving many family farms in financial ruins.

So Jody went off to college, as did I. High school sweethearts, we stayed in touch and eventually married.  In 2002, we were both happily settled into a white collar, suburban life.

We had recently bought a house in Des Plaines, a suburb a few miles west of here on Dempster Ave.

We had a small son with another on the way. I had what I thought was an excellent working mom job.  I worked part time as a ‘professional skills’ trainer for the big accounting firm, Arthur Anderson.

We were pretty much right where we, and everyone else, expected us to be.

When Arthur Anderson became implicated as part of the financial scandal involving Enron, my job, along with many, many others worldwide, was a casualty.

That spring a visit home for Mother’s Day planted a seed of an idea that quickly grew.

Jody’s mom & dad were talking about renting out the house on their small piece of land that had belonged to her parents.  That, along with the grandparents wish, “It sure would be nice if you kids were closer” sparked a life changing discussion on the drive home.

By June we had a For Sale sign in our yard.

In July I went on interviews with school districts within a 45 minute drive of our new home. (I would resume my career as a Special Ed teacher, while Jody stayed home with the boys and launched the farm business.)

In August we moved to Ottawa and founded Cedar Valley Sustainable Farm.

The following spring we had launched the first CSA in LaSalle county. Community Supported Agriculture (CSA) was a much less familiar idea then.  We quickly developed our ‘elevator speech’ .

“CSA , or Community Supported Agriculture”, we would explain, “is a partnership between farmers who grow the food and the people who eat it.  You know where your food comes from and how it was raised and we have a business model that lets us plan for the future.”

That first year Cedar Valley had about 50 members in our vegetable CSA and 10 drop off locations.  We were exhausted by the end of the season, and wondering if everyone who had doubted our sanity was right.

Luckily, we found that the community in CSA doesn’t  just refer to us and our customers, it also means there is a community of other farmers who are out there, like us, changing the paradigm of how food is grown and sold.

We connected with that community at a conference in Michigan. There we learned from farmers who were further down the path and willing to share what they had learned, in formal presentations, panel discussions and just hanging out in the hallways.

We left that gathering with renewed resolve, practical advice, and a passion for farmer to farmer education.

The following years brought change and growth, successes and mistakes.  2006 saw the birth of our 3rd (and final) son.

That was also the year that we applied for our first grant.  One of the challenges we have always faced, like many small business owners, is access to capital.  Our business was launched with the profit we’d made on the sale of our suburban home.  Each successive year’s CSA members had invested their money up front, at the beginning of the season, which provided seed money (literally) for that years’ crops.

But we wanted to branch out in a different direction, raising livestock and selling meat, and that required an investment.

We got that grant from SARE. SARE stands for Sustainable Agriculture Research and Education, it is a very small part of the United States Department of Agriculture..

That money helped us begin a new venture, one that would result in the first Meat CSA in Chicago.

Unbeknownst to us at that time, that grant also launched us into our roles as farmer educators/speakers/activists. 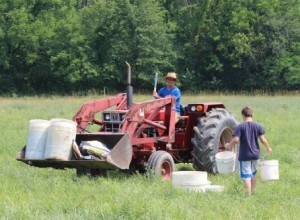 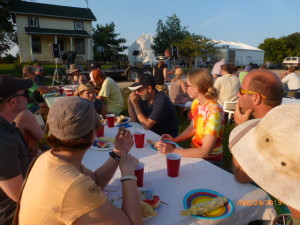 It began with a requirement of grant winners that we share what we learned from the project that the grant helped finance.  To do that we hosted a field day on the farm.  We took visitors on a tour of the farm.  Explaining the how and why of what we were doing.  We also answered a call for presentations at the Midwest Organic Conference in Champaign and were selected to speak.

From there Jody went on to speak at many farming and food policy events, serve on the Governor’s Food Farms and Jobs council and most recently  become one of the driving forces creating Band of Farmer’s the Chicago CSA coalition. The mission of this group is to promote local foods to the greater Chicago-land area through the CSA  model.  This includes educating consumers and fostering collaboration among member farms.

My path has included speaking at local and national conferences, serving as a ‘farmer faculty’ at Michael Fields Institute and the Angelic Organic Learning Center’s Farm Beginnings program.